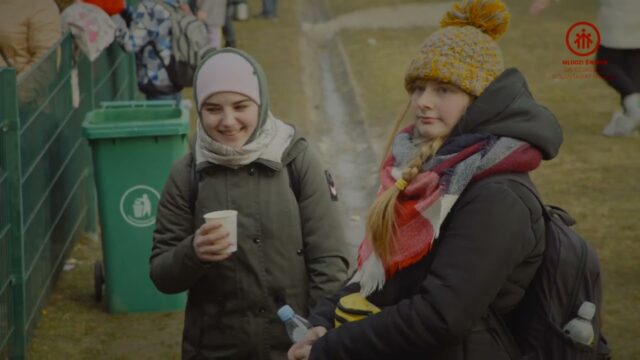 Poles welcomed us as family…

I woke up on Wednesday when the phone rang at 6 o’clock in the morning. My sister said she heard some explosions.

“I called my parents and my dad confirmed that he had heard the explosions, too. My sister told me to pack a suitcase and leave the apartment because it is dangerous, because the war has started,” says Tatiana, a 38-year-old resident of Żytomierz, who, together with Anna and Joanna, found shelter in the Seminary of the Salesian Society in Krakow.

Anna (38) and Joanna (19) are from Donbas, from the city of Makiejka near Donetsk. For the last few years they lived in Zhytomyr, where Joanna studied economics at the local university.

“I went to work to collect my things. In the evening I visited my sister who lives close to the airport. We heard the sounds of approaching planes and helicopters. We learned from the television that there is a war. The following day we made our way to our parents, who live in a single-family house and have a basement, which we adapted as a shelter in the event of air raids and bombings. During the day, anti-aircraft alarms could be heard several times,” Tatiana continues and describes how their journey to Poland looked.

“The Salesians from Żytomierz arrived to help organize support. We left Żytomierz around 3pm on Friday and arrived in Bóbrka after midnight. There we stayed with the Salesians overnight. At 4am, after Mass, we made our way toward the border. About 20 km from the border, when the traffic jam began, we started on foot. We crossed the Polish border after 7pm and arrived in Krakow before midnight.”

Tatiana, like thousands of other refugees, although she has found a safe haven in our country, lives in constant fear for her relatives who remained in Ukraine. She is most afraid for her parents, sister and brother-in-law, as well as for her cousin’s sons, who are fighting in Donbas; they are just over 20 years old.

While in Poland, Tatiana and her friends want to help their struggling compatriots. Soon after her arrival on Sunday, Tatiana spent the day with Salesian Missionary Volunteers at a missionary animation in one of the parishes, where she shared her testimony. “At the last Mass I couldn’t hold back and my tears just poured down,” she recalls.

The women appreciate the support they and their compatriots are receiving in Poland. “I was very surprised that Poles welcomed us as family. We were given warm meals and hot drinks. What worried me was the long waiting time at the border. There were a lot of mothers with children in line, as well as those for whom it was not easy to stand in the cold for so long, especially since there are no sanitary facilities in many places. I am happy and grateful to everyone who helped us.”